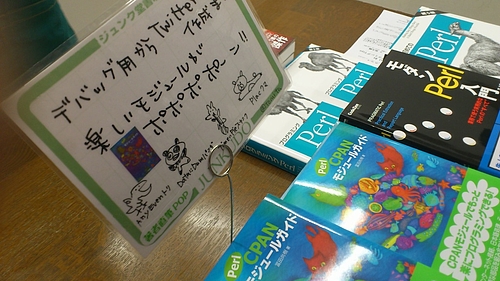 This is a meta-entry about the effort that Gabor Szabo is pushing for right now (grant request, blog entry). I'm writing on my blog because for the life of me blogs.perl.com doesn't accept my OpenID login, and somehow my MT account there was suspended. WTF.
Anyways.
I'm the head director of Japan Perl Association (JPA), which is kind of similar to What Gabor is proposing, but not quite. I thought this story on how JPA came to be, things we had to do, and other considerations will shed some new light into the conversation.
Without further ado here goes:
OOPS, DID I JUST SAY THAT?

JPA originally came about when during a dinner after YAPC::Asia Tokyo 2008, I (Daisuke Maki a.k.a. lestrrat) blurted out "Hosting YAPC without a real organization sucks, let's make one!"

Of course, when you speak up, you get to do it. So Emmerson Mills and I started planning and executing the efforts to bring this organization to reality.
There was much that the Japanese Perl community could benefit from such and organization, but we had find the right raison d'etre, so that we could bring in enough people and organizations to the new entity.
MISSION STATEMENT
Well, actually the mission statement is on JPA site, but that's kind of a general, beautified-for-people-that-only-came-to-glance-at-it type of statement.
What this organization really aims for is to create an environment / atmosphere where corporations can hire more Perl engineers (easily). Basically, we want to convey this message:

"Look (you corporations, employers), Perl is a serious language, and you can get stuff done with it. You also don't have to worry about legacy code, because we will make sure there are more Perl programmers"

(This post is posted on my personal blog, since it contains personal rants and what not -- JPA will probably issue some statements after we've talked to the specialists handling these cases)
So since it's probably of general interest, I'm here to let you know that Testuya Kitahara of the Apache Foundation fiasco fame has filed (and has been accepted!!!!) for the trademark of "Perl" in Japan. WTF? Although it's in Japanese, a more detailed history of events can be found around here.
Weee. So some dude is trying to claim that the name "Perl", a language that has been around, used and abused for the past 20+ years, is his to claim.
(.oO Just to give you some context, this same person is claimed to have been involved with pyramid sales scheme, has attempted to squat on and sell the domain twitter.co.jp to twitter, and is also currently applying to register the words "Ruby" and "Opensource" as his trademark as well )
As the head director of Japan Perl Association (JPA), I'm having to deal with this crud. Sigh. I really don't understand the mind twisting that these kind of people go through to persuade themselves that this is a Good Idea -- and I really hate the fact that both JPA and myself have to spend a significant amount of time and resource on this silly issue.
Anyways, unfortunately the trademark is already accepted. We now have to formally work on repealing it or at least make sure that it does not make working with Perl problematic going forward. So we're going work with specialists, and do the legal dance :/
BTW I've already sent emails to The Perl Foundation's trademark mailing list as well as to friends who I know involved in TPF, but currently no official response has been heard. I wonder what The Perl Foundation is willing to do with all of this.
I'm not trying to blame TPF or anybody here, but a guidance as to what they want to do with this situation would be most welcome, so here's my public plea :)
Also, this is probably going to cost some amount of money -- probably in the thousands of dollars range. We may have to ask for assistance then. oh well.
Anyway, just a heads up for Perl mongers all over the world, so you know the current situation. Stay tuned.